"My spirit will rise from the grave and the world will see i was right." - Adolf Hitler Uncle Adolf
posted 11 months ago by reject_degeneracy (+17 / -0 )
2 comments
Permalink
6

SS Totenkopf Insignia
posted 11 months ago by reject_degeneracy (+6 / -0 )
0 comments
Permalink
6
The Allied Powers did not defeat evil in WW2.
posted 11 months ago by RockPaladin (+6 / -0 )
1 comment
Permalink
The allied powers did not defeat evil in the Second World War. They defeated the only answer to the sliding decline of the West in fascism - fascism was the answer to liberal democracy and communism. This is why of all political leanings that are permissible in today’s political arena, there is only one that is consistently banned and ostracized. They even required a fake genocide to propagate the narrative of how evil fascism is, that’s how great of a threat it posed to democracy.

Written on the snake "Judeocommunism"
posted 10 months ago by nachtwaffen (+9 / -0 )
0 comments
Permalink
from a newspaper called "Nation" by the leader of the Russian Fascist Party, 1937
9 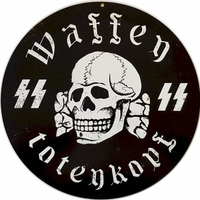